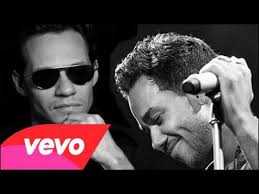 Anthony Santos (born July 21, 1981), known professionally as Romeo Santos, is an American[2] singer-songwriter, record producer, actor, featured composer and former lead singer of the Bachata group Aventura. He became The King of Bachata, and while he was with Aventura, they were known as The Kings of Bachata. As a member of Aventura, Santos has been a key figure in popularizing Bachata, with hits reaching near the top of the Billboard Latin charts and the top of charts in Europe. In 2002, the band’s song “Obsesión” was number one in Italy for sixteen consecutive weeks.[3] After releasing several albums with Aventura, the group went its separate ways. Since then, Romeo has embarked on a solo career which in three years has spawned seven number one songs on the Hot Latin Songs chart and eight number ones on the Tropical Songs chart.